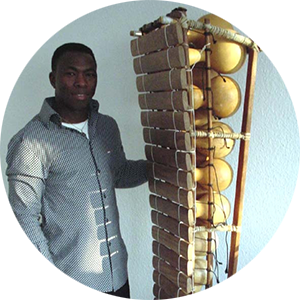 Playing the balafon brings out fascinating sound resonances. Aly Keïta gives you the opportunity to experience the balafon and to dive into the magic of the instrument.

In Aly Keïta’s balafon lessons you will learn the most important parts of the instrument, the correct posture and intonation. By learning different playing techniques you will get an overview of the basic principles of balafon playing, the interval rates and different types of modulation.

The aim of the balafon courses is to learn how to improvise within all kinds of rhythms. The teacher will, for instance, show you numerous possibilities of variation by interpreting simple melodies, for example by means of a song.

In the tradition of balafon playing, music notation is not used. Aly Keïta’s balaphone lessons are therefore based on the traditional African way of playing by ear, in the form of continuous learning. The method of teaching will make you familiar with the musical differences and nuances. You will learn transposition and musical adaptation on the balafon.

Rhythm is essential! In Aly Keïta’s balaphone lessons you will acquire a wide range of knowledge about rhythm.

Rhythm is the lifeblood of music. Everyone has rhythmic potential, find it out and develop it!

The balafon is very suitable for children. The children can experience how the mallets move and by hearing, feeling, imitating and reacting, they intuitively learn the instrument. Lessons are available in small and large groups.

In the pentatonic balaphon group course you can explore the richness and diversity of West African music, especially from countries such as Burkina Faso, Mali, Guinea, Ivory Coast and Ghana etc. No matter if you are a beginner or already advanced. All participants can try out the instrument, come together and improve their skills.

The Balafon is the West African equivalent of the Marimba and has several names, such as Balani, Djeli Balani, Balangi, Balo. It is one of the most famous melodic and rhythmic instruments in Africa and is used as both a solo instruments or for accompaniment. It is also often played in groups of 6 or more instrument in different sizes and in some traditions it can also be played by 2 players at the same time. The oral histories of the Balafon date it to at least the rise of the Mali Empire in the 12th century. In traditional African music it is not tuned using equal temperament and uses a variety of tetratonic (4 note), pentatonic (5 note), heptatonic (6 note) and even septatonic (7 note) modes in more modern usages.

The pentatonic Balafon is an old traditional instrument that has been developed further and further since the 12th century. In addition to its function as a traditional musical instrument, the Balafon also has great spiritual significance and is still used for ritual purposes in several African cultures.

The pentatonic Balafon consists of 12, 19 or 20 rosewood bars that are mounted on a wooden stilt walkers and of calabashes (hollow gourds) which serve as resonating bodies. The bars are played with two mallets either parallel or offset to each other. The mallet heads are traditionally wrapped with gum rubber but modern mallets are also increasing being used. Variations of the Balafon are traditionally found in many places in West Africa. The sound and style of playing can differ significantly in Mali, Bukina Faso or Ivory Coast, for example. In recent years a chromatic Balafon has been developed in the Ivory Coast using tempered tuning just like the modern chromatic Marimba and its popularity is spreading. In the modern chromatic Balafon three or 4 mallets are also used.

Origin of the instrument
West-Africa