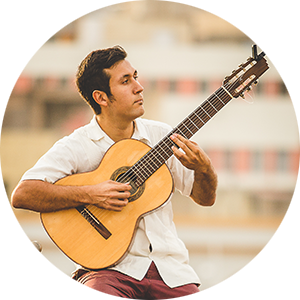 Guitarist, Composer and Teacher for Guitar

Carlos Corona is a guitarist in constant evolution. He began his classical guitar studies at the age of 9 and since then the music has never left him. In the last decade he has traveled through Latin America making concerts and studying with great names of the international guitar scene such as Rogerio Caetano and Alessandro Penezzi.

He has two albums recorded as a soloist and has collaborated in more than 15 productions either as a producer or guest guitarist. His performance at the international Jalisco Jazz Festival 2016 sharing the stage in Teatro PALCCO with John Beasley, Frost Ensemble, Toktli, Federico Sanchez, earned a nomination for ‘Best Jazz Concert Mexico 2016’ (Lunas del Auditorio Award).

Since 2017 Carlos lives in Berlin, where he continued his music career as a solo guitarist and session musician. Since then you can found him in milongas playing with two-time Grammy nominee Carlos Libedinsky; accompanying the Brazilian singer Giovanna Piazza with the Babel Collage project; or playing with his own project for different Theaters in Germany, among other varied projects.