Deadline for registration: 15.12.2021
(After the registration deadline, remaining places may be allocated.) 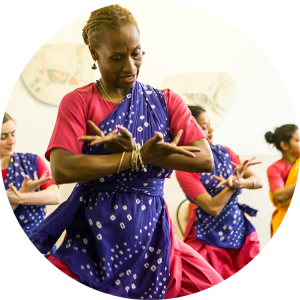 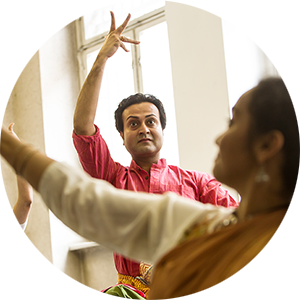 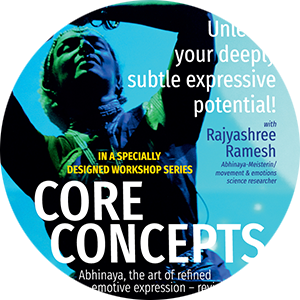 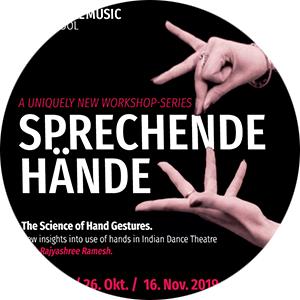 About Bharatanatyam
Bharatanatyam is the name given to a dance form that evolved from the 18th C in the court of Tanjavur, Tamilnadu. Its repertoire as practised today was developed by the Tanjavur Quartett, who were dancers, musicians and scholars at the same time. Central aspects as in all classical forms are nrttta and abhinaya, the non-narrative (nirgiti) and narrative aspects of dance respectively. Continued to be reflected in several subsequent treatises such as the Abhinaya Darpana are later practises of using the stances, gaits, gestures of individual body parts, glances, facial expressions and more, that have been laid down in Natyasastra with detailed knowledge of the body. They are the basis for Bharatanatyam.
This dance style is known for its linear precision and subtle expressivity that emerge from a complex integration of movement of hands, feet and eyes. Hallmark of Bharatanatyam is the grounded aramandi-stance with deep femoral flexion and gradated rotation. It is the position in which not only all movements have to be executed, but also gain their agility and grace.

Learning at the Global Music Academy:
Rajyashree Ramesh offers a unique teaching methodology that highlights these aspects, her pioneering work placing them in the context of modern movement research. The systematic training developed over several decades of teaching learners from all over the world, takes practitioners from the simple to the complex, from individual movements to whole body integration, from form to fluidity, from body functioning to expressivity, from stability to mobility, from the rhythmic to melodic aspects of music, from body knowledge to philosophical background, and much more. The aim at all levels – from Beginners to Advanced to Professional stage performance – is not just to imbibe a specific dance tradition like Bharatanatyam, but the practitioners ability to go within and bring forth outer form to achieve a deep understanding of its relevance for one’s own practise in today’s context. Every class from pre-basics to advanced professional training is an exploration of movement and expression.

Apart from adult courses, kids courses for age groups, 4-6 years and 7-11 years are offered. Learning dance and movement are important aspects of early education, as more and more studies reveal. Central in the courses are therefore both a playful and creative approach to the gestures, postures and movement of Indian dance theatre, as well as a systematic movement analytic introduction to Bharatanatyam from the age of 7 (or 6 if children show aptitude).

This website uses cookies to improve your experience while you navigate through the website. Out of these, the cookies that are categorized as necessary are stored on your browser as they are essential for the working of basic functionalities of the website. We also use third-party cookies that help us analyze and understand how you use this website. These cookies will be stored in your browser only with your consent. You also have the option to opt-out of these cookies. But opting out of some of these cookies may affect your browsing experience.
Necessary Always Enabled
Necessary cookies are absolutely essential for the website to function properly. This category only includes cookies that ensures basic functionalities and security features of the website. These cookies do not store any personal information.
Non-necessary
Any cookies that may not be particularly necessary for the website to function and is used specifically to collect user personal data via analytics, ads, other embedded contents are termed as non-necessary cookies. It is mandatory to procure user consent prior to running these cookies on your website.
SAVE & ACCEPT