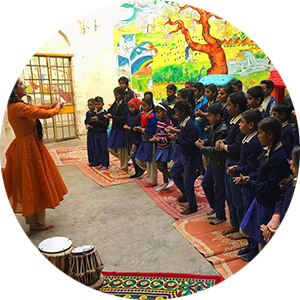 Courses for Kids and Teens 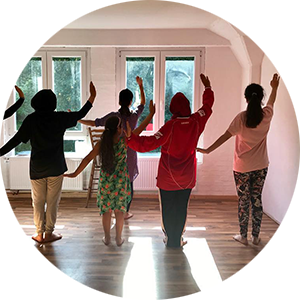 About Kathak
Kathak is a highly dynamic, energetic, graceful, abstract and narrative dance that unites music, movement and theater in a unique way. Kathak, the classical dance of North India, has enriched and transformed itself like no other dance of this country through different cultural influences. Kathaks origin goes back to 400 BCE, when it was held as a ceremony to worship the gods in the Hindu temples. At that time Kathak was an offering to the gods, but also a storytelling medium for portraying the epic tales of Mahabharata and Ramayana. The influence of muslim rulers in India transformed North Indian arts. Kathak evolved from a purely narrative temple dance into a highly rhythmic, dynamic and expressive dance that uses the whole body as a narrative medium. Kathak is a highly stylized dance which follows strict rules, but demands a lot of spontaneity and improvisational skills from the dancer at the same time.

Learn Kathak at the GMA
Ghazal Ramzani teaches the Jaipur style of the Kathak as taught by Pt. Rajendra Gangani. The Jaipur style of Kathak gives great importance to physicality and body control, endurance and dynamics, complex footwork and rhythmic-musical knowledge as well as a nuanced Abhinaya (expression). Ghazal Ramzani’s pedagogical research is currently dedicated to the anatomy of Kathak. She endeavors to analyze the anatomy of Kathak and to develop innovative methods of dance mediation. Her dance lessons are a combination of classical technic practice as well as improvisation exercises based on Kathak’s dance vocabulary and principles. Those improvisation exercises allow a creative approach to movement, space, music and body. The classes are musically accompanied by Ghazal on tabla and harmonium. 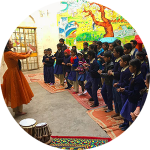 Children have a natural urge to move, which is undermined and severely impaired by the lifestyle in the cities. The lack of physical activity disturbs the natural development process of children and can lead to severe physical and mental deficits. In this course, the basics of the classical Kathaks are taught playfully. The children will move, play, train their bodies, improve their posture and coordination as well as develop social skills.

Teenagers of this age group have a stronger concentration and stamina and are able to learn more complex sequences and choreographies. In this course the participants will learn the basics of Kathak as well as the first choreographies of the classical repertoire of Jaipur Gharana.
Teenagers with and without dance experience are welcome to take part in this course. The classes are a combination of classical exercises, improvisation and choreography.

Course 3: Kathak für adults – beginners with or without dance experience

Kathak can be learned at any age and in any physical condition. Dance and movement is just as necessary for adults as it is for children. Dancing is more than pirouetting and splits. Through dance, we get to know our physical and emotional body. We learn to perceive and understand ourselves and the world around us differently. Dance improves physical, mental and emotional balance. Women and men of all ages and physical states should feel encouraged to attend this course. The physical requirements of everyone are considered and taken into account. 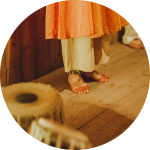 Suitable for students with prior knowledge in Kathak. All those, who have already learned the basics of classical Kathak and have at least two years of dance experience in this field, are welcome to join this course. The technical, musical and theoretical basics of Kathak will be refreshed and deepened through different exercises. The participants will learn more complex sequences ( Bandishes ) and choreographies (Sargam, Tarana, Vandana) and will widen their knowledge in philosophy, mythology and music.