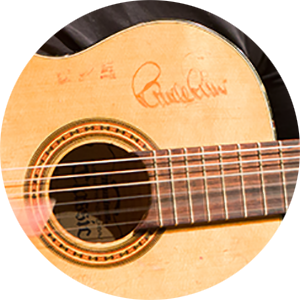 Valle Monje offers flamenco guitar lessons for beginners, with or without previous knowledge, intermediate and advanced players. You can learn and improve your Flamenco guitar in individual lessons or in a group of 2 to 6 people.

The playing style of Valle Monje is based on the flamenco playing of the Andalusian Roma. The course begins with the learning of basic styles such as soleá, siguiriya or bulería. The flamenco techniques of the left and right hand, the chord progressions, the circles, the falsetas (variations), are taught and learned in the traditional way or modern and by ear. The intention is that each student should acquire the basic “palos” and find his/her personal style, freedom and security in a harmonious and rhythmic setting. One of the main priorities of the course is to learn how to listen properly and to accompany the singing. From there, the students can approach the composition of flamenco and styles such as “Tarantos” or “Rondeñas”. Participants will be able to develop their skills as guitarists and musicians.

The flamenco guitar was traditionally dedicated to vocal accompaniment. This led to the development of flamenco techniques such as rajeos, alzapúas (thumb tapping) and golpe (tapping), and above all to certain forms of harmony, colours, flamencura and compás. The “compás” (beat) is more than rhythm or rhythmic pattern, but represents the essence of flamenco playing. The singing, and therefore the flamenco playing, has its own styles, the “palos”, with its own beats, harmonic structures and tones. The solo flamenco guitar has developed from this traditional basis. Beyond technique and repertoire, flamenco playing is a search, feeling and transmitting the “cry of the guitar” (Federico García Lorca) for every tone and every silence.

The flamenco guitar is actually hardly distinguishable from the concert guitar – although the choice of wood for the body plays an important role in terms of the use of the instrument. If the guitar is used for dance accompaniment, a percussive sound is desired. The flamenco guitar generally has thinner top, back and sides and is built from cypress wood. The sound is irresistibly powerful, loud and sharp, especially when played in treble. A special feature of flamenco playing is the use of a capo. By shortening the strings, the instrument can sound higher. This allows the guitar to adapt to the vocal range of singers and achieve certain timbres.
Different cultures, originally from four continents, have influenced flamenco throughout history: the people from the northwest of the Indian subcontinent who came to Europe, the Moors from North Africa who conquered most of the Iberian Peninsula, the peoples of South America who were subjugated by the Spanish, and the inhabitants of Andalusia.
The main function of the flamenco guitar is to accompany singing and dancing. Over the years, virtuosos like Paco de Lucia have developed a new style. Currently we distinguish between the traditional/classical and modern flamenco style.

Origin of the instrument
Spain