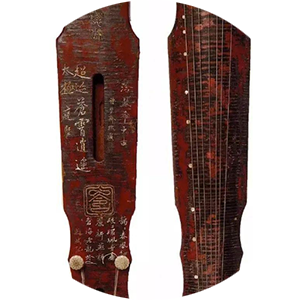 The Guqin lessons with Linchi Yang are suitable for beginners and advanced students.

Guqin is a seven-stringed instrument with around 3000 years history, and it kept this shape since 1600 years ago. Guqin is the an instrument, which occupies a totally special position than any other kinds of music instruments in Chinese culture, music and history. This is not just an ordinary musical instrument. It also contains the whole Chinese culture, cosmology and philosophy. Around Guqin, a rich ideological system and practicing form have been gathered. All of these are collectively named as Qin Dao(the lore of the Guqin).

Chinese condensed their cosmology and the symbols of culture on Guqin. It contains the symbols of Dao and Qi, the flow of time, the expansion of space, Yin and Yang, the Five Elements, the Sun and the Moon, the Stars, the seasons, the mountains and seas, the rituals, the souls and our physical bodies…

For a Guqin-er, with a piece of Guqin in hand very much equals to attaining a dear friend, as well as possessing one’s own piece of universe. Guqin music is based on the observation and close study of the pattern and rhythm of how natural universe functions, also the human beings. The aim of Guqin is simply to be “played” or, to say, to be practice with. While practicing with the instrument, we form a deep connection with our inner being as well as the universe through physical actions of the performer, as well as the flow of sounds on the strings. a Guqin master expresses one’s emotional feelings and communicates with one’s inner state of being through the sound of the instrument, and then let the music guides, transcend and transform his or her inner world. In this way, Guqin is part of a daily ritual for a Guqin-er.