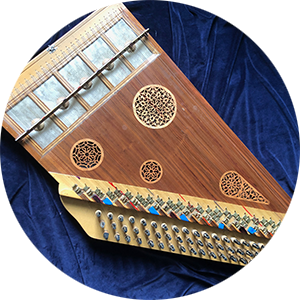 Kanun lessons with Mohamed Askari are suitable for beginners and advanced musicians.

Kanun/Qanun is a caste zither common in the Orient (Turkey, Arab world). It was brought to Andalusia by the Moors in the 10th century AD and is considered the precursor of the European psaltery. (Which in turn is the archetype of the zither, dulcimer and harp).

The shape of the Kanun is trapezoidal, the number of strings varies depending on the construction between 60 and 80 (according to other information between 63 and 84 strings), which are arranged in a three-strand configuration. I.e. for each tone 3 strings must be played at the same time.

The strings are plucked or struck with both hands, using a plectrum on the right and left index finger.

In order to be able to modulate, at the beginning of the 20th century foldable levers were installed, with which the strings can be changed by the microtones common in Arabic music. Kanon range consists of three and a half octaves. Lowest note is G and highest note is D.

Practice: handling the plectrum, the levers and tuning the kanun

Learning to play short Arabic melodies and the art of improvisation.

Emphasis of the lessons is creativity.