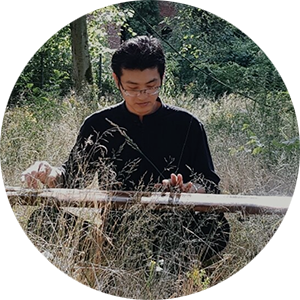 In Chengdu City, Sichuan Province, Linchi was trained by several Guqin professors in Konglin Guqin Pavilion in Wenshu Monastery. This school stems from “Shu” School and is presided over by Zeng Chengwei, the contemporary descendant of “Shu” School. And also he traveled around China to study from and communicate with other Guqin masters. In Chengdu, he began to carry out the teaching and dissemination of Guqin skills with Cui Jiang, an “Shu” School Guqin musician.

With professional background in Chinese Literature, Philosophy and Religion, Linchi was engaged in the study of religious ritual, ritual music and the relationship among Confucianism, Buddhism and Taoism. From the perspective of the music, situation and the rhythm of the body as the starting point he do the research of Guqin practice, and the relationship between Daoism and Guqin.