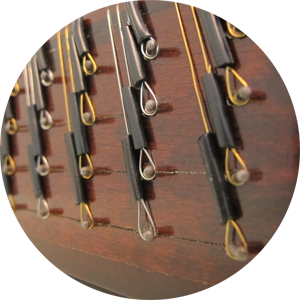 The Santur lessons with Yaser Bayat are suitable for beginners and advanced players.

The Santur is a trapezoidal instrument and its played with wooden mallets. The instrument counts to the family of string instruments and has also similarities with the instrument „Zither“.

You can find the persian instrument as well in Europe, but in a different way. Especially in Hungary or Romania, it is known as a „cymbal“. Zithern in general are also found in different countries – but there, the instruments are typical for the folk music. In contrast to that, the persian Santur developed since the 16th century to an instrument of the classical, masterly art music.

The Santur exists in several sizes. Her compass has generally around 3 octaves. On one side of the wooden resonator are whirls for tuning. On the other side are the strings. The instrument is played soloistic or in an ensemble. Remarkable is the clear and bright sound.