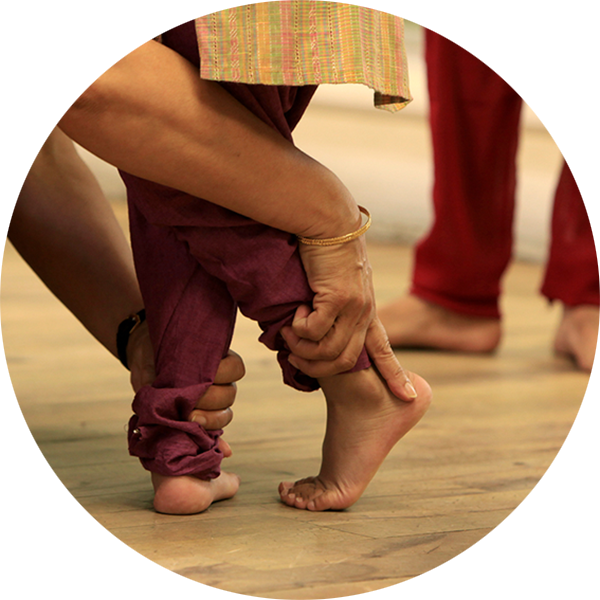 Movement training suitable for all levels, including absolute beginners, and all styles of dancing, based on the classical movement vocabulary. No prerequisites

About performing arts of India

Included under the label Classical Indian Dance are dance and dance theatre forms that continue to follow the long tradition of performing arts called Natya as defined in the ancient treatise Natyasastra (Bharata, ca. 3 BC to 5 AD). Integral this were dance, music and spoken theatre. While Kuchipudi continues to have all three forms, Bharatanatyam is the name given to a dance form that evolved in the 18th C in the court of Tanjavur, Tamilnadu. Its repertoire as practised today was developed by the Tanjavur Quartett, who were dancers, musicians and scholars at the same time. Central aspects as in all classical forms are nrttta and abhinaya, the non-narrative (nirgiti) and narrative aspects of dance respectively. Continued to be reflected in several subsequent treatises such as the Abhinaya Darpana are stances, gaits, gestures of individual body parts, glances, facial expressions and more, that have been laid down with detailed knowledge of the body.

Bharatanatyam is known for its linear precision and subtile expressivity that emerge from a complex integration of movement of hands, feet and eyes. Rajyashree’s courses at the Global Music School highlight these aspects, her pioneering work placing them in the context of modern movement research. The systematic training developed over several decades take practitioners from the simple to the complex, from individual movements to whole body integration, from form to fluidity, from body functioning to expressivity, from stability to mobility, from the rhythmic to melodic aspects of music, from body knowledge to philosophical background, and much more. Of importance for Rajyashree are the practitioners ability to go within and bring forth outer form, every class from pre-basics to advanced professional training an exploration of movement and expression.

More information
In the tradition of the classical Indian dance, the education starts with the age of 9 years