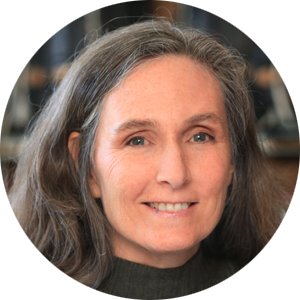 Laura Patchen, born in New York City, came to Berlin in 1977. Here she began learning tabla in the guru-shishya parampara system with the late master drummer, tabla tarang soloist, sarod player and composer Kamalesh Maitra. As his master pupil she accompanied her mentor on his numerous concert tours throughout Europe, to the USA, China and India from 1978 onwards. In 1979 she began performing in Maitra’s formation Drums of India and in 1980 she became a founding member of his Ragatala Ensemble. Taking on a contemporary approach, this group performed Maitra’s compositions based purely on Indian classical music integrating both European and Indian instruments until his passing in 2005.

Laura appears on several recordings such as “Tablatarang und Ensemble indischer Trommeln”, “Ragas on Drums”, “Kamalesh Maitra and his Ragatala Ensemble”, “Der Zuckerbäcker aus Kalkutta”, and “Rhythm and Time – Global Percussion Songs”. Parallel to performing Indian music, she has also lent her tabla sounds to projects involving jazz, pop and hip-hop. She started teaching in 1985, joining the Berlin Musikschule City West in 2005, the Global Music School in 2012 and the Musikschule Fanny Hensel in 2018. She directs and composes for the Tabla Ensemble “Kamalesh Maitra”.

Some steps along the way

„As someone involved deeply with the classical music of India, it is important to me that its value as a major art form be recognized and propagated as widely as possible. I’m inspired by the fact that learning and playing music helps cognition in general, holistically integrating both intellect and emotion. The singular idea of establishing a center in the middle of Europe where musical diversity would be represented and taught resonated with an ideal strongly held: to find a calling where no harm be done to the planet and in so doing, furthering peace by advancing transcultural appreciation.“