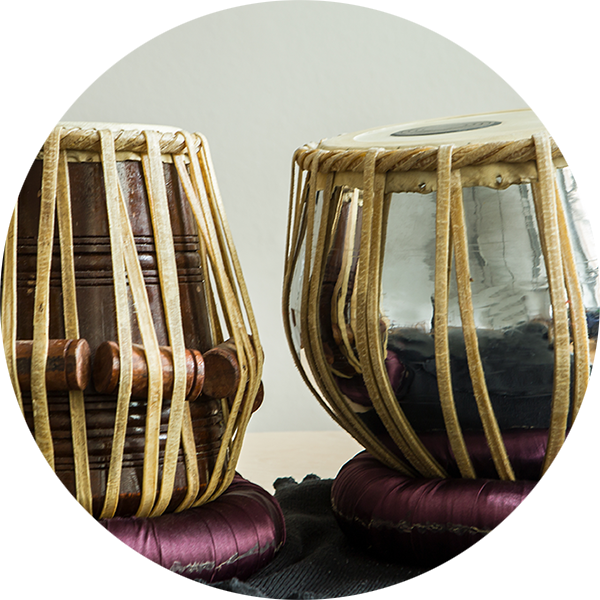 Tabla is the most widely known Indian rhythm instrument. Made up of two hand drums, the smaller, higher-pitched wooden dayan is played with the dominant hand, while the lower-pitched bayan, generally made of metal, is played with the non- dominant hand. The black paste applied to the surface of the skin of each drum serves to produce the distinctive resonance of the tabla, making it possible also to precisely tune the dayan to a specific note. The playing technique involves using each finger individually, as well as the palms of the hands. This allows for the forming of a large number of nuances in sound and, within a clear system of rules and aesthetics, for improvising in up to very high speeds. Taal, the element of time organized within a rhythmic system of cycles in the classical music of India, is considered as essential as the melodic system, called raag. The tabla has a large repertoire of compositions which has been handed down from generation to generation, showing regional differences as seen in the 6 major playing styles. Because of its versatility, tabla is a rhythm solo instrument par excellence. It is the preferred accompaniment for modern North Indian classical and semi-classical vocal styles, instrumental music and kathak dance. With the spread of Indian music to all parts of the world, the tabla has found its way into such diverse genres as pop, jazz, fusion, hip hop, film scores and music used in advertising.

North Indian tabla drumming comprises a vast solo and accompaniment repertoire including a highly refined method for improvising within a fixed rhythmic framework. The process of learning to play the tabla has a powerful integrating effect, challenging the intellect while engaging the emotions. In acquiring the necessary technique, from day one students will start to enjoy bringing out the myriad complex sounds this pair of drums is capable of producing. Correct position and posture is the first step. Learning the onomatopoeic language of the tabla and practical exercises in fingering will lead to being able to play basic rhythmic phrases and patterns. These building blocks will be combined to enable an acquaintance with the North Indian system of rhythmic cycles, called taal. The forms of traditional compositions will be explored by experiencing how to recite while clapping to keep the taal. Guidance will be given on how to practice. While learning to play tabla takes time, a steady practice furthers coordination, trains the ear, schools memory and cultivates concentration. Being able to accompany all kinds of music or play with other tabla players in a group will be the reward.
Particularly suitable for children, learning to play tabla helps in developing fine motor skills while learning basic musical concepts. It is a fun way to improve learning, encourage discipline and promote attention while nurturing the imagination.

Individual and group lessons are offered to all levels of students; children from age 6 after a trial class. Ensemble playing and performance is offered for the more advanced. Lessons can be held in German, English and Spanish

Origin of the instrument
North India