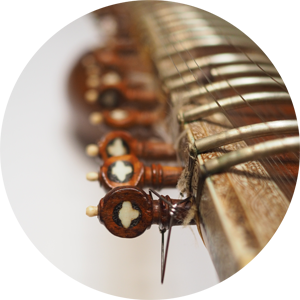 The sitar is a plucked long-necked lute. The instrument dates back to medieval India, flourished in the 16th and 17th centuries and reached its present form during the 18th century.

The sitar consists of a calabash (dried gourd) as the resonating body and a long neck on which there are sliding brass frets. A sitar usually has 18 to 20 strings.

The sitar is used in classical Hindusthani music and is widespread throughout the Indian subcontinent. The sitar gained worldwide popularity from the late 1950s and early 1960s.