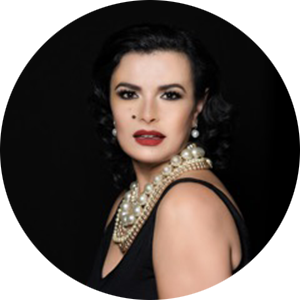 Singer and teacher for Tanbur and classical Turkish singing

Meral spent the first years of her life with her grandparents in Central Anatolia. From an early age she heard the singing of her grandfather, learning in this way about the traditional Turkish music and developing a love for it. She had her debut as a singer at six years old, in the primary school in her village. In the mid-1970s Meral moved with her parents and two siblings to Berlin. Her talent and drive for singing became apparent in the primary and secondary school and her music teachers encouraged Meral’s musical development. From then on she became a popular singer at school festivals and concerts.

At the age of 13, she took private singing lessons by Osman Sıddık Doğan and started learning how to play Bağlama, a traditional Turkish long-necked lute. The percussion virtuoso Matthias Bautz taught her rhythmics and how to play Bendir, a big hand frame drum.

In the early 2000s, she met the Oud virtuoso Nuri Karademirli, founder of the Conservatory for Turkish Music in Berlin. This meeting was for Meral a crucial godsend. She studied for 3 years at this conservatory, classical singing, Tanbur, a long-necked lute, and the theory of Turkish classical music. She took private lessons with N. Karademirli for 9 further years and after 12 years she received from him the certificate for these studies. During her studies at the conservatory, she was inspired by Petra Luise Meyer for an additional training as singing therapist. Meral has attended seminars in Istanbul and Crete in the famous music school “Labyrinth” by the singer Ahmet Erdoğdular.

In her early career Meral founded together with M. Bautz and three other musicians, the „Salsabil” ensemble. They released a classical Turkish music album named „Salsabil“ and performed at numerous concerts. Following the separation from “Salsabil”, Meral and her female-drum-group „Nasrin“ continue delighting the audience, at home and abroad.

Meral worked as soloist, chorister and Tanbur player in the choir of the Conservatory for Turkish Music, as well as at concerts at the Philharmonic and at numerous other events. In 2010 she founded the “Meral Cihan Ensemble”, focusing on Turkish classical music. To this ensemble belong Meral, both as director and singer, plus 6 other musicians with the following instruments, Oud (lute), Kanun (zither), Ney (reed flute), Violin, Bass and various percussion instruments.

Her latest project is the “Divan Ensemble”, which is internationally engaged and promotes cultural exchanges between east and west. Meral is a popular singer who participated in countless film and world music projects.

Meral Cihan is teacher for Turkish Singing and Tanbur at the Global Music School since August 2020.

“As long as I can remember, I have been interested in music. In all these years I have maintained the passion and enthusiasm for music and have constantly expanded my repertoire. Therefore I am all the happier that I can teach together with great musicians under the roof of the GMA and pass on my knowledge and the repertoire I have learned.”