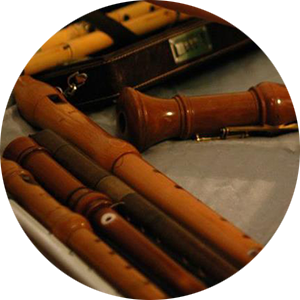 Recorder lessons are aimed at children, teenagers and adults, and are suitable for beginners to advanced players. The objective of all courses is to achieve a good musical level on the instrument.

The main emphasis in recorder lessons is on learning correct breathing, articulation and finger techniques. At the same time, the focus is on exploring different musical styles in order to play the recorder in an expressive, precise and dynamic way. The use of secondary fingerings will also be learned. Correct breathing, which is fundamental to all wind playing, is also taught.

Flutes of various shapes are among the oldest European instruments that were used in prehistoric times to communicate with each other over long distances, for example during hunting.

The golden era of the recorder as a musical instrument began in the Middle Ages and ended towards the end of the 18th century. During the 19th century, the recorder was almost forgotten by classical music (although it survived in European folk music and as a “Csakan” in the Biedermeier period), but it experienced a revival at the beginning of the 20th century.

The recorder features in the classical and early music scene around the world, and is also used in contemporary music. The recorder is one of the most important instruments in early musical education, as it is often used as an introductory instrument for small children.