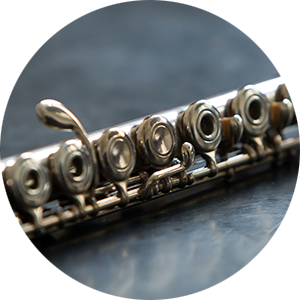 flute lessons are for beginners as well as advanced students, children, teenagers and adults. From about seven years old you can start playing this wonderful instrument, and – contrary to what many people think – you don’t need to have learned recorder before.

As a beginner, it is better to start with single lessons. Later you can do double lessons. If you have more than three students, it is an ensemble, where you can discover beautiful works with three or more students, but each student needs individual lessons.

In individual lessons as well as double lessons there is always a first part of warming up the flute: one practices for example the tone, the technique, the scale. Then pieces are played – solo pieces, duets, pieces with CD accompaniment, accompaniment with another instrument… Then there are rhythm and ear exercises (there are different games for this), reading notes (in German and in Italian, the language of music).

For beginners there are beautiful pieces from classical as well as traditional music from different countries of the world available. For advanced you can play different things. Telemann, Bach, Mozart but also Brazilian and Cuban music, Jazz, Waltz… The student is also always welcome to bring something to class that he/she would like to play.

The flute is a woodwind instrument. In fact, it was made of wood for centuries. In the course of the XIX century it was gradually made of metal; this allowed a more precise production and the instrument was lighter. However, the sound was completely changed. From there, musicians who play ancient music play with wooden flutes to recover the right sound.

The flute appears in the Middle Ages, and comes from Asia. It keeps its medieval aspect until the XVII century. From the XVIII. Century it will get an important place as a soloist in the orchestra.

Nowadays, the flute is played a lot in orchestral and contemporary music, but it is also one of the most important musical instruments in Latin American music. It is also played a lot in jazz, and it can adapt to many other musical styles.